I mentioned:
BTW, it appears all Microsoft employees received a signed copy … maybe we can get him to sign a couple of them at the next MVP Summit!

Well apparently I was a bit early with preordering so now I already bought and received the book even though I was offered a complimentary copy of the book yesterday as well. So I lost my money on the book? Hell no, Satya is donating all of his proceeds from Hit Refresh to Microsoft Philanthropies.

A while ago I preordered Hit Refresh on Amazon:

It’s the book by the ‘new’ Microsoft CEO. I’m interested to read it and see how it compares to the books by Bill Gates. My guess is that it is a complete different type of book, but we’ll see. I downloaded it on my (Android) phone so I can dive in whenever I have a minute to spare

BTW, it appears all Microsoft employees received a signed copy … maybe we can get him to sign a couple of them at the next MVP Summit! 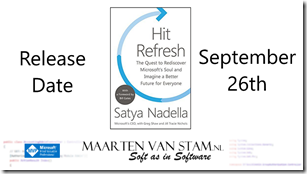 Satya Nadella wrote a book about the transformation of Microsoft and his journey coming from India as a child to the Executive role he now performs within Microsoft. I think it is a tradition CEOs write books, Bill Gates had a few (these days he is more into reading books and sharing his book picks every now and then in lists on his blog)

I just pre-ordered Satya’s book, to see how this is different from the books I read earlier published by Bill Gates. My guess is that it will be of a complete different order. We’ll see, it will arrive on my Kindle when it is released September 26th.

The book is now on preorder here:

if you use that so I can buy more computer books and blog even more about interesting technologies! But don’t worry it won’t cost you anything extra …

With the twentieth anniversary of Visual Studio and the forty-second broadcast of our Dutch SDN Cast we speak with André Obelink on the subject of VB (Visual Basic) and the future of it. Forty-two is also the answer to life, the universe and all according to the Hitchhikers Guide to the Galaxy. Enough reasons to check out the recording on YouTube for this week.

A returning question by many developers is will Visual Basic be around in the near future and if so where will it be positioned by Microsoft. A valid question, as it often appears that also with Microsoft Visual Basic seems to be the ‘forgotten’ language. APIs, sample code and documentation is released for C# at first and following a bit later the VB submission (sometimes we are still waiting for VB equivalents to arrive). We discuss all of this in depth, so if you are Dutch speaking look at this week’s Dutch SDN Cast.

Next to Visual Basic several other subjects get by, from the light-hearted topics such as Xbox Gaming to the very extensive exercise to write books and again – is there a future in book writing.

All in all enough topics making it well worth to jump to YouTube and watch the recording of the 42nd Dutch SDN Cast if you haven’t already watched it live last week.

Subscribe to our YouTube channel so you won’t miss a single episode. Usually we are broadcasting live on Thursday evening 8PM GMT+1 in the winter but it might change depending on how things go that week. If you want to be sure you better subscribe to our channel on YouTube or go to http://www.sdncast.nl to discover when our next show will be planned. It will show you when the next show is starting.

News of the week

Getting Started with a Mixed Reality Platformer Using Microsoft HoloLens
https://blogs.windows.com/buildingapps/2017/02/27/getting-started-mixed-reality-platformer-using-microsoft-hololens
Node v7.7.1 (Current)
Node.js 7.7.0 contains a bug that will prevent all native modules from building, this patch should fix the issue.

You can already register, so put it in your scheduler and register!

We hope you like to watch our SDN Casts. We try to keep up with the news in about an hour a week. You hear what is new and get fun demos on technology and Software Development that you can use in your daily job.

Don’t forget to Subscribe to our channel as we can get a better URL to remember our channel if we reach the number of subscribers needed to add this and make your and our lives a bit easier! And if you haven’t heard if you are the number 100 Subscriber you get something in return! Subscribe: https://www.youtube.com/channel/UC3oE_YPB4AJVQSInC-yy3pw?sub_confirmation=1

Go to the website and check when our next broadcast will be!
http://www.sdncast.nl.