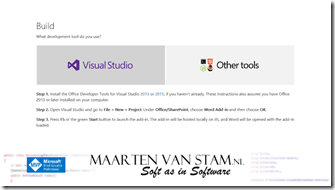 A while ago, not too long, I showed you how to start developing your Word Add-in from scratch using nothing but command line tools. Check my blog archives for the last couple of weeks if you missed that. Today we are looking at the same process but now using Visual Studio.

Where to begin? According to the page: https://dev.office.com/getting-started/addins going through the process of steps you select Word as Add-in host, and Visual Studio as tools to build your Add-in will finally show you the following screen:

The process however is still unchanged for the most part, I will show it in practice in a later blog, but if you follow the three steps you are basically already there, where without Visual Studio and just using the command line tools we had to go through a large series of requirements and certificate fixes to make that work.

Apparently Visual Studio takes a lot of this out of your hands and is doing all that for you. Not completely fair, because with Visual Studio you also need to go through the installation process. I want to find out what this all is and put that in a blog post as well

It’s party time! There was even more than one party, a lot to celebrate this week! Obviously, starting with our own fortieth SDN Cast and that’s a number worth mentioning.

But there is more. In 1997, twenty years ago now, Visual Studio was released and this week there was announced that the upcoming version “Visual Studio 2017” will be released starting March 7th in an online event by Microsoft and local events will be organized at various locations around the world between March 7 and April 30th. Look for it in the links below to see if there are any events in your area to go to. We will obviously spend some attention as well on our next SDN Event – March 17, with some sessions in this area.

And we’re not there yet, five years after the first release of Visual Studio Microsoft changed direction by releasing Visual Studio .NET and as the name reveals, birth of .NET. The new way of programming with the new .NET framework. Until that time everyone was working with MFC -Microsoft Foundation Classes- libraries or other technologies. There was a big change in the way we were going to develop and brought many new features, think of the Roslyn language services. This allowed all sorts of new benefits where we haven’t seen the end of it.

A lot of attention for the past, but there is a lot of interesting new stuff to come in the near future. We are looking forward to the release of Visual Studio 2017.

Where can you find SDN Cast 40?
https://youtu.be/zL3CIJTK2sk

Subscribe to our YouTube channel so you won’t miss a single episode. Usually we are broadcasting live on Thursday evening 8PM GMT+1 in the winter but it might change depending on how things go that week. If you want to be sure you better subscribe to our channel on YouTube or go to http://www.sdncast.nl to discover when our next show will be planned. It will show you when the next show is starting.

News of the week

E3 Now open to public, anyone can register
https://www.e3expo.com/show-info/3197/access-has-been-granted/

Microsoft shares open source system for training drones, other gadgets to move safely on their own

Welcoming Jon Galloway as the new Executive Director of the .NET Foundation
https://dotnetfoundation.org/blog/welcoming-jon-galloway-as-the-new-executive-director-of-the-net-foundation

We hope you like to watch our SDN Casts. We try to keep up with the news in about an hour a week. You hear what is new and get fun demos on technology and Software Development that you can use in your daily job.

Don’t forget to Subscribe to our channel as we can get a better URL to remember our channel if we reach the number of subscribers needed to add this and make your and our lives a bit easier! And if you haven’t heard if you are the number 100 Subscriber you get something in return! Subscribe: https://www.youtube.com/channel/UC3oE_YPB4AJVQSInC-yy3pw?sub_confirmation=1

Go to the website and check when our next broadcast will be!
http://www.sdncast.nl.