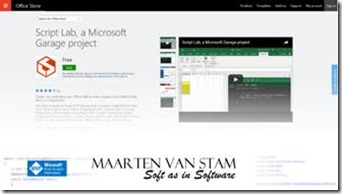 Up to now we researched creating and deploying a simple Office Add-in in Word Online and Word on your local machine. We still need to see how this Add-in can be deployed to a so called production environment, maybe even with a dev and staging level.

We also didn’t do much development so far. We just generated a boiler-plate project using Yeoman but we need to dive in some more and look at some real code to learn how your JavaScript for Office solutions would work.

To do so Microsoft released an interesting tool as a Microsoft Garage project called Script Lab. With this tool you can code, write your test scripts and interactively test the outcome of your work. Based on the Monaco editor, yes … the one that also powers VS Code, you get a lightweight editor with in-editor-help like IntelliSense inside your Office client application. Your code snippets can use a wide variety of options such as JavaScript, TypeScript, HTML, CSS and more.

The code can run from another pane giving you options to interact with the UI, address the JavaScript for Office API and providing monitoring options such as output to a console

When you are done coding, tested it and added all the comments you now can share your snippets to GitHub right from the tool ready to share to your peer developers. With the Import function, you can do the same with code you got from shared snippets that you received from others.

Microsoft Garage Script Lab lived for a long time internally starting off a simple personal project under a different name but eventually matured by a hackathon and many other improvements to the tool you see today. The list of supported environments is huge:

The add-in works in:

Remember that (we’ve discussed this a couple of blogposts earlier) each of the Office versions support their own subset of the APIs. When using Office 2013 your options obviously are much more limited than when using Office 2016.

How to get the tool:

You can get the tool, or look at the code by browsing to GitHub:
https://github.com/OfficeDev/script-lab

In follow-up blog posts, I’ll show how to install the Add-in and hopefully try to use and build some sample code to experiment with the JavaScript APIs for Office.