One of the issues, the one when using WPF controls caused a massive delay in closing Office applications, I worked close with the team to test and get this solved. The issue also reported on Connect was a hard one to fix as it depended on many factors such as Touch Screen interfaces and appeared on previous versions of the Runtime.

The second issue addressed by this update covers the publisher’s name and verification status to show properly when using SHA256 code-signing certificates where the Trust Prompt at first displayed “Unknown Publisher” even when the publisher was fully trusted.

Read more about the Runtime Update at the blog from the VSTOTeam located at:
VSTO Runtime Update to Address Slow Shutdown and “Unknown Publisher” for SHA256 Certificates

You can download the latest version of the VSTO Runtime at http://go.microsoft.com/fwlink/?LinkId=140384 and will be distributed as part of Windows Update.

I for one am very happy to see this solved and released to the public. Our enterprise firm encountered the WPF issue on a large scale just after deploying our top of the bill new laptops to all of our users and would like to thank the VSTO Team for working with us to get this out of the way! We really spent a huge amount of hours in this to cover all the scenarios we could think of in both new and older (existing) add-ins. 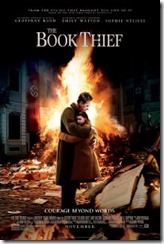 The “Showtime” section on my blog is a reminder, mostly for my own reference but maybe helpful for other film enthusiasts as well, to remember what movies I’ve seen lately, what it was about and how I rated it in general.

The Book Thief is about a little girl, unable to read and write at her early years to be abandoned by her mother in times of war in the 1930’s. While living at her foster parents home she learns to read and write and especially gets the affection to read books. To be able to read books she steals (or borrows) the books and was called “The Book Thief” by one of her neighbor boys.

the perspective of a German family in war time isn’t used in many films. Especially a family giving shelter to a Jewish refugee in a city of Germany is a less common thing to project.

The movie is highly (maybe over-)dramatized, displaying some intense situations people had to go through when the world was at war. Although the level of dramatization could be a bit less overall it is a touching story. The girl playing Liesel Meminger (Sophie Nélisse) is a rising star and I think we haven’t seen the last of her yet.

I expected the movie, given the amount of nominations, to be somewhat better and rate it a high six out of ten.